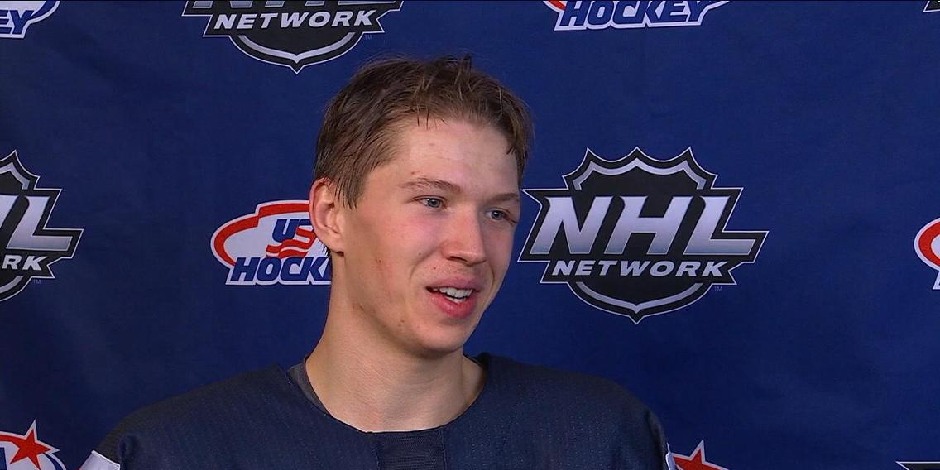 Why Is Matthew Boldy Popular?

Matthew Boldy is a young ice hockey player from the US. He plays the position of Left-wing. He is playing with the ‘Boston College team’ and recently got drafted by ‘Minnesota Wild’.

Matthew was born on the 5th of April, 2001 in Mills, Massachusetts. He grew up in his birthplace. Born in 2001, Matthew is currently (as of 2021) 19 years old. He was interested in ice hockey from a very young age. Boldy played hockey from school level and was in junior and later in the senior school team. Boldy watched every ice hockey game when he was a kid. The information on his family is currently unavailable.

Born in Massachusetts, USA. Boldy is a hockey giant. Though young age, Boldy is physically massive.

Boldy got his schooling in the Dexter Southfield School located in Brookline, Massachusetts. And he joined the Boston college/university in Boston city for higher education.

Matthew Boldy is a sports lover and ice hockey enthusiast. Besides that, Boldy is a music lover.

The 19 years old Matthew is currently dating ‘Grace Henderson’ @grace_hendo for one and half years as per sources. We don’t have any information about his past relationships. He is unmarried and has no children.

In 2010, Boldy played for ‘Boston Jr. Bruins’ for a year. In 2015, he played for team ‘Northeast Elite U15 but couldn’t show a good game. And in 2016, he played for his school team ‘Dexter Southfield School’. He performed well on the school team. The same year he also played games for the “Cape Cod Whalers” U16 team. In 2017, Matthew had a breakthrough in his career as he was selected for the U.S. National U17 team.

And he performed very well. Boldy has also played numerous games for ‘USNTDP Juniors’. In 2018, He made an appreciable figure in the U.S. National U18 team. Since 2019, he has been playing in the college team for “Boston College” in the “Hockey East Association”. Later he was drafted by professional hockey team “Minnesota Wild” in 12th place overall in the NHL Entry Draft 2019 in the first round.

Net worth and Lifestyle

Matthew Boldy has an estimated net worth of $2 million to $5 million.

Boldy Loves to work out and maintains physical fitness. He lives a simple life. Besides that, Boldy love to travel and frequently goes on a vacation with his friends, girlfriend, and family.