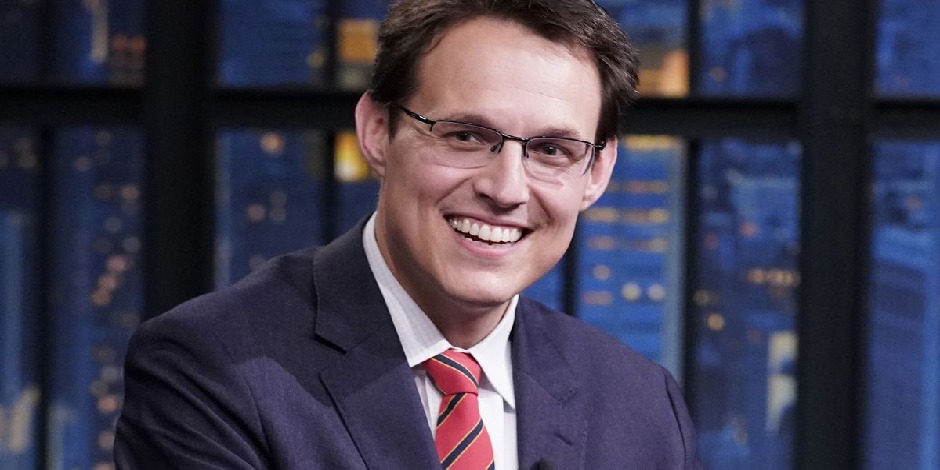 Steve Kornacki is an American political journalist, multimedia anchor, television host, as well as writer. He is the former data analyst in MSNBC who covered the campaign, The Place for Politics in 2016.

He is currently working for NBC News as a national political correspondent.

Where was Steve born and raised?

Steve was born on 22nd August 1979 in Groton, Massachusetts, United States. He is the son of Anne Bernadette and Stephan Joseph Kornacki Sr. Kornacki’s birth name is Stephan Joseph Kornacki. He grew up with his older sister, Kathryn Kornacki who works as a professor at Caldwell University. There is no information regarding his parents’ occupation but Kornacki grew up in a wealthy family.

Kornacki has an American nationality and white ethnicity of Polish descent. He has the birth sign, Leo.

Steve Kornacki is an educated and hardworking man. He completed his high school at Groton-Dunstable Regional High School (GDRHS) in Groton, Massachusetts. Kornacki always had good grades and he never had any problems in his school. Kornacki always knew that he was going to be successful in his career. He later graduated with a degree in film and television from Boston University.

How did Kornacki start his Career?

Steve Kornacki started his career from the political news site called PoliticsNJ.com where he worked as a reporter for 4 years. The site was owned by an American businessman and Republican Party politician, David Wildstein. He has worked for MSNBC’s news talk show called, The Cycle as a host. Kornacki has further worked in some famous newspapers such as The Wall Street Journal, New York Post, The New York Observer, The Daily Beast, The New York Times, The Boston Globe, and so on.

Kornacki covered the political campaign in 2016. He also covered the election count of 2020 and became the Twitter boyfriend. In 2021, he presented the elections’ depth coverage and behind the scenes of the latest polling for elections. Kornacki is also an author of the book, The Red and the Blue: The 1990s and the Birth of Political Tribalism which was released in 2018.

Steve Kornacki is gay. He isn’t married yet neither has been in any relationship yet. Kornacki hasn’t introduced us to any guy yet as he seems to be busy in his career. Kornacki came out publicly through a Salon magazine in 2011. He isn’t shy to talk about his sexuality and many gay people out there are batting their eyes on him.

Kornacki is a huge sports fan. He has always been an ESPN addict. He enjoys watching American football. But more than that, he is addicted to his work. For him, an election day is just like a super bowl. Kornacki currently resides in the east village, lower Manhattan, New York.

Steve Kornacki celebrated his 42nd birthday on August 2021. He is a fine handsome man who keeps maintaining a simple look usually rocking in a suit and shirt. Kornacki has a slim body build. He stands 6 feet 1 inch tall which is about 185.5 cm and weighs 75 kg or 165.5 lbs.

Steve Kornacki has an estimated net worth ranging from $1-$5 million as of 2021. Kornacki is leading a successful life as a national correspondent and political journalist in the United States.