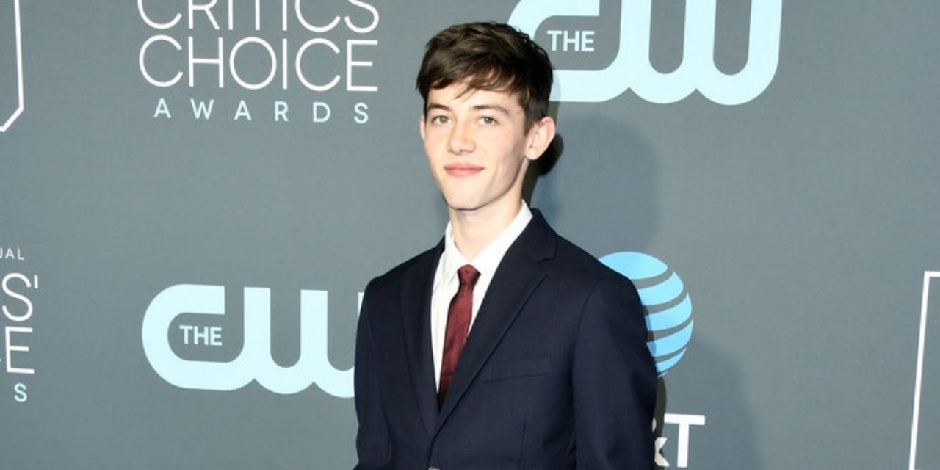 Griffin Gluck is a well-known American actor who is popularly known for his roles on “Red Band Society” alongside Diane Kruger and David Thewlis, “Private Practice” and “Back in the Game”. He has seen working actively on his career since the year 2009.

Where was Griffin born and raised?

Griffin Gluck, whose real name is Griffin Alexander Gluck was born on 24 August 2000 as a son of his father, Cellin Gluck, and his mother, Karin Beck. His father is a film director and producer where his mother was a production assistant and line producer. He has an older sister whose name is Caroline Paris Gluck. His age is 20 years.

Gluck holds an American nationality and belongs to the ethnicity of Japanese, Ashkenazi Jewish, German, English, Scottish, Irish and Polish. His zodiac sign is Virgo.

Earlier, he went to attend the University of Southern California, A Los Angeles, and further information is not mentioned by him.

Who is Gluck currently dating?

Before he was in a relationship with a singer Sabrina Carpenter but they broke up later and currently, Gluck is single now.

How did Griffin Gluck start her career?

Griffin Gluck started his film career after he had been cast as Pharmacy boy on a movie “Sideways aka Saidoweizu” in 2009. Griffin started his television career after he had been cast as half Bred on an American mockumentary sitcom television series “The Office” in 2010. After that, in 2011, he was seen playing the role of Monty on an American television comedy-drama “The United States of Tara” which was created by Diablo Cody.

In 2011, he was seen appearing in the role of Michael is an American romantic comedy movie “Just Go with It” which was directed by Dennis Dugan and was written by Allan Loeb and Timothy Dowling.

Further, in the year 2013, she was seen appearing in the role of Phillip on an American comedy-drama movie “Trust Me” alongside Paul Sparks and Clive Owen which was written and directed by Clark Gregg. In the following year, he was seen playing the role of Randy Morgan in a black comedy-drama movie “Just Before I Go” which was directed by Courteney Cox.

After that, in 2015, he was seen providing his voice over the character Young Bruce Wayne on a direct-to-video animated superhero movie “Batman vs. Robin”. In the same year, he was cast as Donnie on an American comedy movie “LArru Gaye: Renegade Male Flight Attendant” where the movie was directed by Sam Friedlander and was written by Mike Sikowitz.

Likewise, Griffin Gluck was seen appearing as Max in the movie “All Hallows’ Eve 2” in 2015. After that, in the year 2016, he was cast on an American live-action comedy movie “Middle School: The Worst Years of My Life” which was directed by Steve Carr and was written by Chris Bowman. That year, he worked on an American romantic comedy movie “Why Him?”, written and directed by John Hamburg, co-written by Ian Helfer.

In the year 2018, he was seen providing his voice over the character Henry on an American computer-animated movie “The Boxcar Children: Surprise Island”. After that, in 2019, he was cast as Monroe “Mo” Harris on an American coming-of-age comedy movie “Big Time Adolescence” which was written and directed by Jasonorley.

From the year of 2011 to 2013, he was cast into the main role of Mason Warner on an American medical drama television series “Private Practice” where Gluck became able to grab the attention of many people and received lots of positive responses. After that, from the year 2013 to 2014, he was again seen playing the main role as Danny Gannon on an American sitcom “Back in the Game” from which he had also earned more fame and popularity in his career.

In the year 2014, he was seen appearing in the role of Adderall boy on an American comedy television series “Silicon Valley” which was created by Mike Judge, John Altschuler, and Dave Krinsky. Further, he was cast as the main cast as Charlie on an American teen medical comedy-drama television series “Red Band Society” from 2014 to 2015 which was developed by Margaret Nagle.

Likewise, in 2015, he was seen appearing on several series like “About a Boy”, “Cuckoo” and “Life in Pieces”. In the year 2016, he was cast as Austin on an American sitcom “Impastor” which was created by Christopher Vane. Later, in 2017, he was seen as Dylan on an American television sitcom “The Mick” which was created by Dave Chernin and John Chernin.

Likewise, from the year 2017 to 2018, Griffin Gluck was cast into the main cast as Sam Ecklund on an American documentary streaming television series “American Vandal” and after that, in 2020, he was also cast into the main cast as Gabe on an American supernatural horror drama “Locke & Key”. Further, was also seen on series like “Love Life” and “The Real Bros of Simi Valley.

Griffin Gluck became able to be nominated in Best Performance in a Feature Film – Supporting Young Actor” category which is by his work on “Just Go with It”.

What is the Current Net Worth of Griffin Gluck?

Griffin Gluck is a young, handsome, and talented guy, who has been seen working on several movies and series, has an estimated net worth of $1 million.