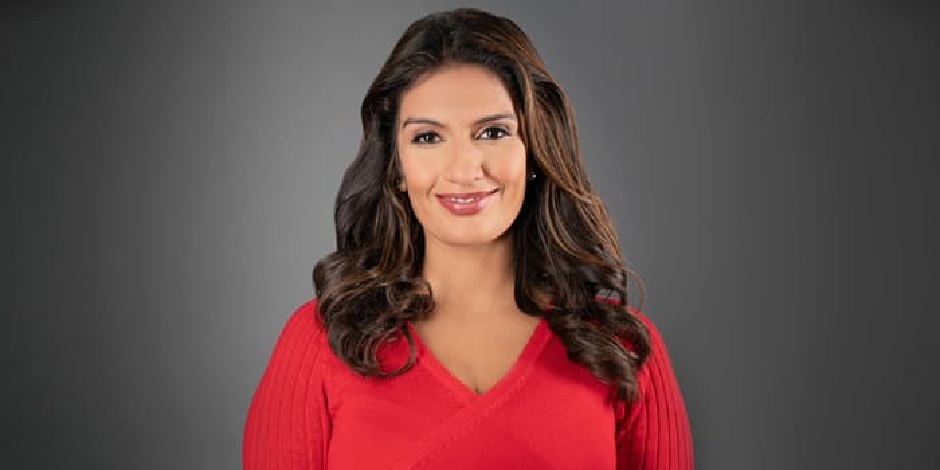 Hena Daniels or Hena Doba is an American anchor at Cheddar Inc. and former correspondent at CBS News.

Where was Hena born and raised?

Hena Daniels was born on 4th December 1977 in Queens, New York, the United States, to Pakistani parents Tahmina Faraz and Agha M. Zulfiqar. She hasn’t disclosed further information about her family members, but we believe she has a minor brother.

Daniels was born and raised in the United States. Thus, she has American nationality, but she has mixed ethnicity as her parents are from Pakistan. In addition, she has Sagittarius as her birth sign.

Hena Daniels graduated from high school in her hometown. She later completed her BA from University at Buffalo in English and Psychology.

How did Daniels start her career?

Hena Daniels started her first job at the campus newspaper called The Spectrum as a feature editor. She worked there from October 2000 for nine months. She then worked for WWTI ABC50 & The North Country CW in New York as a band reporter for ten months. After that, Hena worked for WTOC-TV as a general assignment reporter from April 2002 till September 2004, WFSB TV in Hartford for more than five years as a news anchor.

Daniels left WFSB TV temporarily to join WGCL/CBS46, where she served as general assignment reporter/ Primary fill-in anchor for over two years. She worked as an adjunct professor for Capital Community College at Hartford for seven months and at the Connecticut School of Broadcasting in Farmington for more than a year. Hena again returned to WFSB TV as 11 PM News Anchor/Reporter. After working for almost two years, Hena left to work at CBS News, where she worked as CBS Correspondent in 2015.

Hena worked for CBS News for almost four years, and in January 2019, she left CBS News to join Cheddar Inc. to work as an anchor. It’s been more than two years since she has been serving as an anchor in the company. Hena has also opened her personal YouTube channel with over 100 subscribers. She goes by the name Hena Doba on YouTube.

Who is Daniels married to?

Hena Daniels is committed to an American media strategist, Andrew Ronald Doba. The couple tied their knot on 24th January 2016 in a venue at Hartford called Hartford Society Suite. Andrew has a son, Henry Doba, from his previous marriage. Previously, he used to work in Connecticut as a director of Governor Malloy’s Communications. He now works in Manhattan’s strategic communications firm. Henry is an educated and hardworking man.

Hena Daniels has not given birth to any children yet. She loves her stepson like her own son. The couple used to reside in Greenwich, Connecticut. Now, they have moved to New York as Hena moved to Chedar Inc.

Hena Daniels has an estimated net worth of $1 million as of 2021. She is an independent woman and is professional in her work. Hena’s net worth is estimated to increase more in the coming years. She is living a great life with her husband and her stepson in new York.