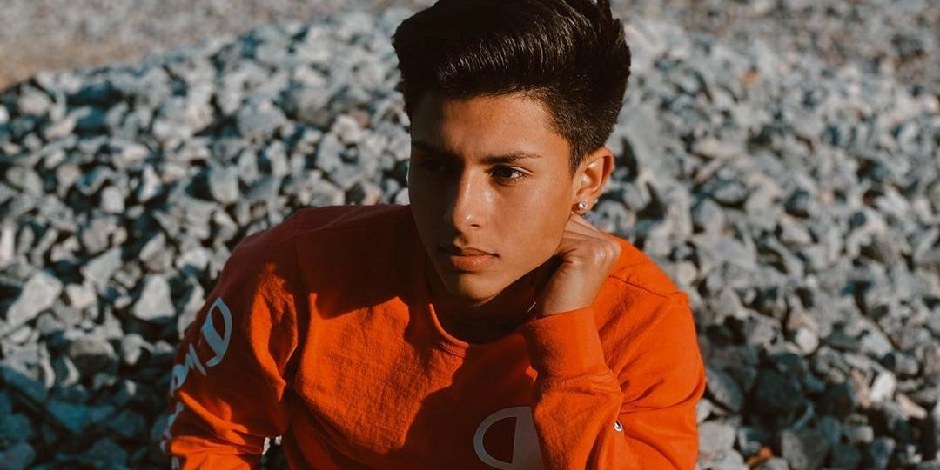 Alan Cruz is an American Tik Tok star and social media personality well-known for his short dance clips and lovely content with her girlfriend, Martina Orti, who is also a popular Tik Tok star.

Alan has gained over 41.9 million likes on Tik Tok with over 853.1 thousand followers. He is a rising social media star who has caught the attention of thousands of people all over the world with his handsome face and cute video content.

Where was Alan born and raised?

Cruz was born on 2nd October 2001 somewhere in the United States. He is believed to be born to a Hispanic family whose names are yet not disclosed in public. Alan possesses American nationality and mixed ethnicity. He has Libra as his birth sign. He hasn’t yet disclosed the name of his parents except for his mother, Eilyn Prado, and his younger brother named Andrew Cruz.

Alan grew up in a luxurious household family. He is leading a happy life with his family in the United States. Alan is also in high school and is an active soccer player. The name of his high school hasn’t been disclosed yet.

How did Alan start his career?

Almost all of his videos on Tik Tok are made with his girlfriend. He occasionally makes videos of his lip-syncing, dancing, and many more. His brother and mother occasionally appear in his video.

Alan joined YouTube in November 2019. He has already gained over 27.3 thousand subscribers. He has only posted three videos till today with his girlfriend.

Some of his videos are “Q&A WITH MARTINA!! BREAK UP EXPLAINED!!!,” “CHEATING ON MY GIRLFRIEND WITH HER SISTER PRANK | PLOT TWIST…SHE WANTS TO JOIN!!,” and “SURPRISING my GIRLFRIEND WITH A SLINGSHOT!! Vlog around ATL.”

Alan Cruz celebrated his 20th birthday on October 2021. He is known for his handsome face and attractive body build. He possesses an athletic body build as he spends most of his time in the soccer field and gym. Alan stands 5 feet 6 inches tall which is about 66 inches and weighs 76 kg. He has black hair and brown eyes. He doesn’t have any tattoos yet and he loves to brag about his look.

Who is Cruz in a relationship with?

Alan Cruz is currently in a relationship with a beautiful girl named Martina Ortigosa. His girlfriend is also a social media personality. They first made eye contact with each other in their high school where Alan was playing soccer.

Alan decided to ask for Martina’s Snapchat id. They started texting and soon became a couple. They broke up shortly in 2020 but soon patched up. As of today, the couple is living a romantic lifestyle.

Alan’s mother is very supportive of his relationship with Martina. His girlfriend often appears in his mother’s Tik Tok. She is also a dancer and we can often see her dancing with Alan.

Alan Cruz is on Instagram where he has over 38.1 thousand followers. He is not much of an active social media user. He barely makes posts on his Instagram but he can be connected with @alanncruzzz. Unfortunately, he is not active on Facebook and Twitter.

Alan Cruz has an estimated net worth of over $1.5 million as of 2021. He is living a luxurious life with his parents. He owns his luxurious car and has also launched his charger brand for iPhone named ANKER.