Skip to content
Home » Gossip » Jackie Mason, one of the last borscht belt comedians, dies a normal death at the age of 93. How was the life of a legendary comedian and how did he rise to fame?

Jackie Mason, one of the last borscht belt comedians, dies a normal death at the age of 93. How was the life of a legendary comedian and how did he rise to fame? 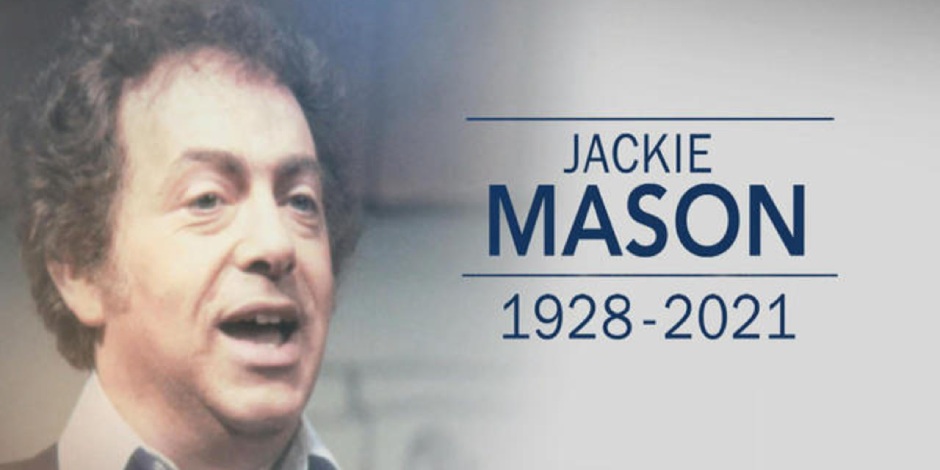 Jackie Mason, the stand-up comedian who was known as an icon in the performing arts industry and held a series of one-man shows on Broadway, has died on Sunday in his home in Manhattan, New York, at the age of 93.

His death was confirmed by his close friend Raoul Felder, stated a column in The New York Times. Mason is survived by his wife, Jyll Rosenfeld, who he married in 1991, and daughter Sheba Mason who is also a comedian.

The stand-up artist who was often a subject of controversial topics and his unapologetic Jewish humor was known for his political incorrectness and for being a blunt comedian who didn’t beat around the bush to make his point.

Mason’s often culturally grounded humor was sometimes described as irreverent and stale by some critics. But he was renowned for his delivery and voice works and his perfect usage of innuendo and pun. The criticism that he got didn’t stop him from performing, and the legendary comedian won a series of Emmys and Tonys throughout his career.

He is one of the few artists to have received such accolades and a huge fanbase without performing significant roles in television or movies. However, he did do a series of voiceovers for the American cartoon series, The Simpsons on multiple episodes.

On the show, he was the voice of Rabbi Hyman Krustofsky, the father of Krusty the Clown, which won him his second Emmy for his sublime efforts in 1992. He made an appearance as himself in a 2007 episode of the show entitled “30 Rock,” and most recently, he voiced the character in a 2014 episode.

It’s not like he was completely absent from the bigger picture, as later on in his career, he was part of “The Stoolie” in 1972 and also later starred in another movie called “Caddyshack II” in 1988. In addition, in 2010, he starred in a self-written courtroom dramedy called “One Angry Man,” which was loved by his fans.

On television, he starred in the 1989 sitcom “Chicken Soup” that aired briefly on cable and also hosted 1992’s “The Jackie Mason Show,” which was his breakthrough on the television network making him more visible to a large audience. The show generally discussed everyday topics with a lack of seriousness and much irreverence, which became a precursor to Bill Maher’s “Politically Incorrect,” which premiered the following year. The show made ‘Jackie Mason’ brand of humor more palpable to the American audience at the time.

Jackie Mason was one of the last surviving members of the “Borscht Belt comedians”, who were known for their Jewish humor and a perfect combination of strong views on racial and ethnic politics. The American lifestyle and psyche portrayed by Mason in his comedy were almost accurate and relatable to every working-class American out there back in the day, no matter their origin and descents.

Born Jacob Moshe Maza in Sheboygan, Wisconsin. Mason grew up on Manhattan’s Lower East Side. He was initially ordained as a rabbi as his family tradition, but he ultimately resigned from his post at a synagogue to become a comedian.

During his origin, he brought an early version of his insult-laced dark humor to a Borscht Belt hotel in the mid-1950s, but the audience was not ready for that sort of comedy just yet, which left him disappointed and questioning himself.

The comedian who had established himself as a Broadway favorite received a 1987 special Tony Award for his highly successful solo effort “Jackie Mason’s The World According to Me!,” which ran for a record number of 573 performances. He also received an Emmy award for writing the show after it aired on television the following year.

His massive success with the show led to the production of more one-man performances on Broadway, and he came out with “Jackie Mason: Brand New” in 1990, “Jackie Mason: Politically Incorrect” in 1995, “Love Thy Neighbor” in 1996, “Much Ado About Everything” in 1999 and “Jackie Mason: Freshly Squeezed” in 2005. His last one-man show, “Jackie Mason: The Ultimate Jew,” didn’t run on Broadway.

“The show is one long jab at the world’s hypocrisy, dusted with one-liners from the ‘take my wife, please’ vaults. Mason can be painfully old-fashioned, like when he tells the millionth joke about expensive restaurants serving small portions, but he doesn’t seem to care.”, The Variety magazine wrote of “The Ultimate Jew”. For an aging crowd often ignored by the entertainment industry, the comedian’s refusal to be modern — and his mockery of modern ways — may be a comforting show of solidarity.”

“It’s harder to be amused,” the column continued, “when Mason turns to minority groups. Inevitably, his barbs are about the foolishness of those who are not like himself and his aging, Jewish fanbase.”

Although popular among the older generation, Mason lacked the context and ability to connect with the more younger generation that was more likely to attend shows at Broadway. Unlike George Carlin, who would find explosive and radical humor with any audience that was sitting in front of him, Jackie Mason was more old-fashioned. Still, we understand it’s difficult for people to change and stay dynamic, especially when you’ve been doing the same thing your entire life.

However, several recordings of his live performances proved quite successful on television and home video.

In 2004, Comedy Central did a special number on Comedy Legends, and in the program titled “Comedy Central Presents: 100 Greatest Stand-Ups of All Time,” Mason was ranked No. 63.