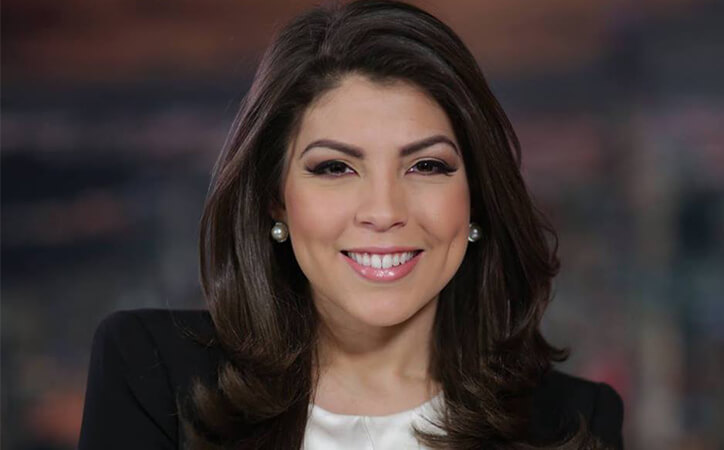 Nicole Suarez is an American-born journalist, TV host, and news correspondent, well-known as an Emmy-award holder.

Nicole Suarez was born on 7 June 1994 in Miami, Florida, the United States, in a happy family. Suarez’s father’s name is Jorge Suárez and mother’s name is Soraya Campos. Her family owns a restaurant called Colombian Steakhouse, which was founded in 1991. Talking about her siblings, she has two siblings and among them one is a sister named Luna, and another is a brother named Leo.

Now, she turned at the age of 27, and according to her birth date, her zodiac sign is Gemini. Suarez holds an American nationality, and as per her ethnic background, she belongs to the ethnicity of Columbian.

Besides this, she attended DePaul University for her education, from where she received her bachelor’s degree in broadcast journalism in 2014. However, further details about her educational background are still yet to know as she has not mentioned it.

How did Nicole start her Career?

Nicole Suarez has established herself as a famous journalist, TV host, and news correspondent. She is also an Emmy-award holder, which she has mentioned on her LinkedIn profile. In addition, she has been working actively for Telemundo’s national morning show called “Un Nuevo Dia” as a news anchor.

Nicole is a very active and talented woman well-known as NBC Universal’s news anchor’s “Noticias Telemundo.” Besides this, she grabbed people’s attention at first after becoming the contestant in “Nuestra Belleza Latina” season 5, where she became the second runner-up.

Further, she also worked for Hoy Noticias, and at that time, she was the youngest among other workers. Likewise, she won an “Emmy Award” that is for telling the story about the Hispanic community, especially about children and their problems.

Nicole Suarez is a beautiful woman, but information about her physical statistics is still missing, so it becomes hard to know about her actual height, weight, body measurements. However, looking at her pictures, we can see that Nicole possesses brown eyes and brown hair.

Nicole is a very private person, so it becomes hard to find out if she is in a relationship. Likewise, she also has not been a part of any gossip or rumors, so it can be assumed that she is single for now and focusing more on her career.

Nicole Suarez is active on Instagram with the tag name (“@nicolesuareztv”) where she has 71.2K followers and posted 711 posts. She has shared many beautiful photos and videos on her Instagram account with her family and friends that many people liked and commented on. She looks amzing on her every post with her stunning looks.

Suarez also has a Twitter account with the tag name (“@NicoleSuarezTV”), where she has 10.2K followers and tweets 4589 times. She also opened her Facebook account named “Nicole Suarez,” where she has 43,002 followers, and she posted her beautiful photos that clicked on the workplace.

A beautiful, active and talented Nicole Suarez is a well-known journalist, TV host, and news correspondent who was an Emmy-award holder. Currently, she enjoys a standard life with an estimated net worth of $5 million.