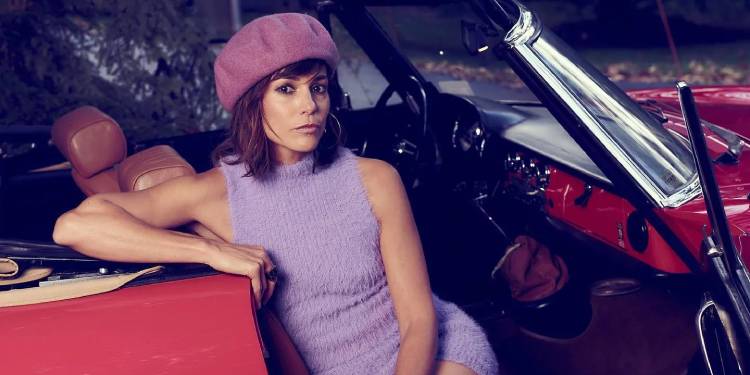 Stephanie Szostak is a popular French actress who gained international fame after her appearance in the films “The Devil Wears Prada,” “Iron Man 3,” “Dinner for Schmucks,” and so on.

Szostak is currently portraying the main role of Delilah Dixon in the ABC drama television series “A Million Little Things.”

Stephanie Szostak was born on 5th August 1975 in Paris, France. She hasn’t disclosed the name of her parents yet, nor any information about her siblings is known yet. Szostak is pronounced as “Sho-stack.” She was raised in Paris and moved to the United States after completing high school.

Szostak has both French and American nationality. She belongs to the white ethnicity. Szostak was born under the star sign Leo.

Stephanie Szostak completed her high education in her home country, France. She didn’t have any plan of joining an acting career. Szostak attended the College of William & Mary in Williamsburg, Virginia, United States. She graduated with a Bachelor’s degree of Science in marketing. Szostak used to play golf and was a member of the women’s varsity golf team while in university.

How did Stephaine start her Career?

Stephanie Szostak made her film debut in 2003 with the film “Si’ Laraby.” In 2005, she won Bend Film Festival Award for Best Actress for her performance in “Satellite,” where she portrayed the role of Ro Mars. Szostak gained international fame in 2006 after her role as Jacqueline Follet in the movie “The Devil Wears Prada.” She also made her television debut and took several small roles until 2014, when she gained her first main role, “Satisfaction,” as Grace Truman.

Szostak landed another main role as Delilah Dixon in the television series “A Million Little Things” alongside actress Lizzy Greene, Tristan Byon. The series is still running in 2022. She has further appeared in several films such as “The Good Heart,” “The Rebound,” “How to Seduce Difficult Women,” “Dinner for Schmucks,” “Iron Man 3,” and so on.

Who is Stephanie Szostak married to?

Stephanie Szostak is happily married and settled with a handsome man named Britt Szostak. The couple has been blessed with two beautiful sons whose names aren’t disclosed to the public yet. Her husband is a financial advisor who works in Lenox as a partner and managing director. Szostak’s older son is 18 years old, and his younger son is 14 years old. She confessed that her sons are the ones who helped her cope with the depression and stress. Szostak currently resides in New York City with her husband and two sons as a pet dog.

Stephanie Szostak is 46 years old, and she will be celebrating her 47th birthday in August 2022. She is a beautiful woman possessing a slim body build. Szostak stands 5 feet 6 inches tall which is about 168 cm, and weighs 52 kg or 114.5 lbs. She possesses dark brown hair and eyes. She is known for having short wavy brown hair with bangs. Her hair in the movie “Dinner for Schmucks” is one of her iconic looks.

Stephanie Szostak has an estimated net worth ranging from $1-$5 million as of 2022. The majority of Szotak’s earnings come from her acting career. Apart from acting, she is highly active in charitable works. She is also a storyteller and runs a story community called Our Boob Stories and is the ambassador of a non-profit organization, Change Direction.