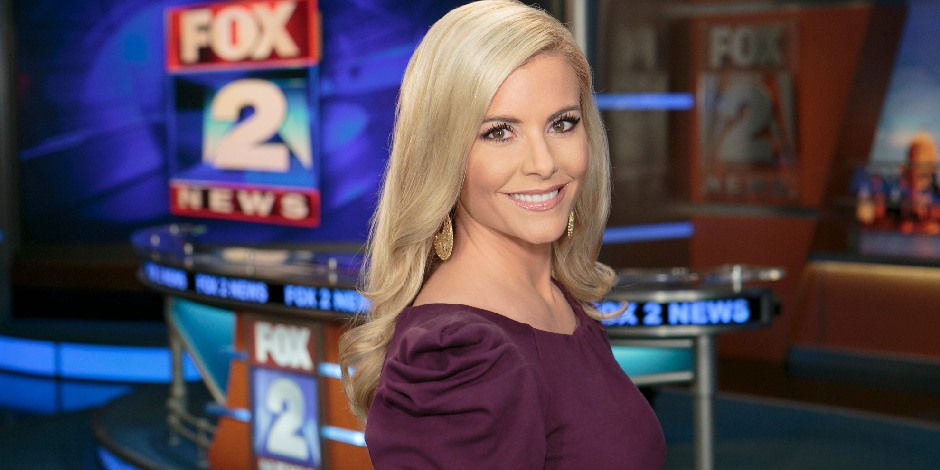 Amy Andrews is an American-born journalist working for WJBK FOX 2 News in Detroit as the morning news anchor. Likewise, she also worked for “KSBY 6”, “WNEM TV5-MY5 Meredith Corp”, and more.

Amy holds an American nationality, and she is quiet about her ethnic background.

Amy Andrews spent her childhood happily with her siblings and parents. She grew up beautifully in a good environment. Further information about her early life and family members, there still a question mark as she is very secretive about her personal life.

Where did Amy go to College?

She went to attend the Indiana University for her education, and he did her study on Biology and Pre-Med for three years. After that, she joined the Oakland University and had a Bachelor of Arts in Journalism. For her further study, she went to attended Specs Howard School of Broadcast Arts, from where she completed her graduation.

Likewise, when she was doing her study in college, she got the chance to work as a weekend sports anchor at WSYM, and later, she also did her internship in the Detroit Lions.

Amy Andrews established herself as a well-known American journalist. She grabbed the attention of many people after she started working as the morning co-anchor at FOX 2 News. From August 2011, she started working for WJBK FOX 2 Detroit. Likewise, she also worked for “KSBY 6”, “WNEM TV5-MY5 Meredith Corp”, and more.

Who is Andrews married to?

Amy is a married woman as she married her husband, Rodney Thomas, in 2008. Rodney is a school principal, and they fall for each other after they met. Together, they gave birth to their daughter Grace Elizabeth in January 2021.

Check out the latest updates on Host and Contributor Pete Hegseth

To talk about Amy Andrews’s physical statistics, she has a height of 5 feet 9 inches (1.75 m). Besides this, she has a beautiful face with blonde hair and brown eyes. Likewise, further information about her physical statistics like weight, body measurements, shoe size, and more still has a question mark as she is a very private nature personality.

Amy is active on Instagram with the tag name (“@amyandrewsfox2news”), where she has 32.6K followers and posted 344 posts. She has posted many beautiful photos on her Instagram account, where she received many likes and comments.

Amy also has a Twitter account with the tag name (“@Amy Andrews Fox 2”), where she has 50.4K followers and tweets 18.4K times. Similarly, she has also created a Facebook account named “Amy Andrews Fox 2” where she has got 58K followers. She seems quite popular on her social media accounts. She has posted many photos that have clicked on her worked place, with her friend and family.

A beautiful, active and talented  Andrews is well-known for being a journalist, anchor, and reporter working for WJBK FOX 2 as the morning news anchor. She has gained huge popularity and success as a journalist because of her hard work and dedication. Currently, she is living a very happy and standard life with an estimated net worth of $1 million.