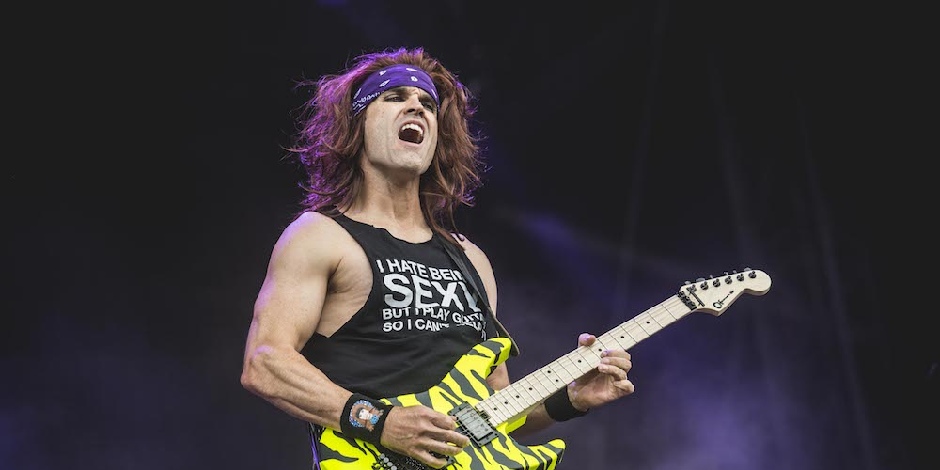 Russ Parrish is an American musician and songwriter and is the guitarist of an American rock band, Steel Panther. He is well-known by the name Satchel or Rikki Ratchet to his audience.

Where was Rush born and raised?

Russ Parrish was born on 24th November 1970 in Redwood City, California. His birth name is Russel John Parrish. He grew up playing guitar from an early age. He has never once opened up about his childhood or his parent’s name; hence their names are still a mystery. He was raised in a rural part of the city called Fresno in California. Rumors have been that he has at least two brothers in his family.

Parrish has American nationality, and he belongs to the white ethnicity. He has Sagittarius as his birth sign.

Russ Parrish completed his high school in his hometown in Redwood city. He later attended the Musicians Institute in Los Angeles, where he joined the Guitar Institute of Technology. He graduated from the institute in 1989 when he was 19 years old.

How did Parrish start his career?

Russ started his career as an instructor and worked with the artists like Jeff Martin and the metal band Racer X. He was also under the guidance of American heavy metal guitarist Paul Gilbert. He rented a room in his Los Angeles home. Parrish also started recording songs in his home and has accompanied Paul Gilbert on many of his albums.

He has worked and accompanied several famous bands and artists of the 90s. He has played guitar alongside Sebastian Bach, The Szuters, Jeff Duncan, Dean Cameron, and many more. In 2000, he started his band named Metal Shop along with Ralph Saenz. After successfully releasing the album “Hotel Patrol,” the band started performing live and in concerts. Some of their songs are “Glory Hole,” “Death To All But Metal, “The Burden of Being Wonderful,” and many more. The band later changed its name to Steel Panther in 2006.

What is the relationship status of Parrish?

Russ is currently single and living a divorced life. He is known for his playboy character, but he is pretty selective and truthful to his lover regarding his love life. Parrish hasn’t dated many people, unlike many celebrities. He was previously in a relationship with a music composer, Julie Greaux. He later tied his knot to a woman named Kelly. The couple together had a son named Jackson and a daughter, Lucy. Unfortunately, the couple got divorced soon after.

He is currently 50 years old, turning 51 in November 2021. He is known for his curly brown long hair. He has a tall height of 5 feet 8 inches, weighing 65 kg. He possesses a muscular body build. He has brown hair and brown eyes, and his sexual orientation is straight.

He is not a social media user. He prefers to be active on any social media platform like Instagram, Facebook, or Twitter. Since he does not show any interest and interactions with his fans, it isn’t easy to learn about his current situations and personal life.

What is Russ’s current Net Worth?

Russ Parrish has an estimated net worth of $1.9 million as of 2021. He made his million solely through his musical career. Parrish has always been a guitar freak and spent all his youth playing guitar. He also endorsed several guitar brands before and released his signature versions too. Some of his endorsements are Kramer Guitars, Charvel, and TC Electronic. He is currently living a life away from all the public chaos and attention.