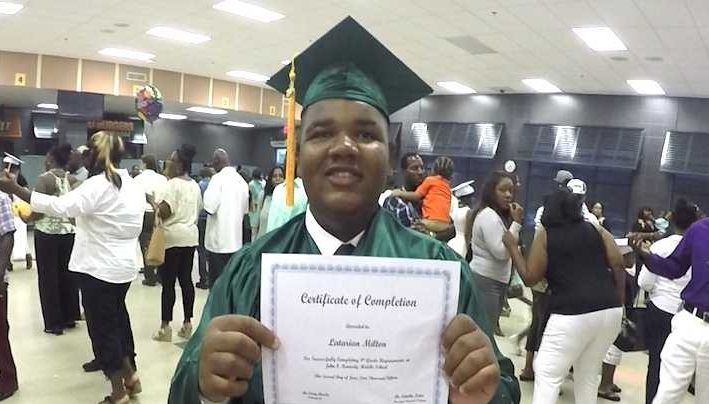 Who is ­­Latarian Milton?

Latarian Milton is a well-known American child who gained his attention at the young age of seven for his juvenile behavior. He is known for the robbery of cars and carjacking a stranger’s car at a very young age all for the sake of “hoodrat stuff.”

Thanks to his childish delinquent behavior, Latarian has become a popular meme figure in the United States. But What did he exactly do? What is he doing now? Let us go through the detailed study of his life.

Where was Latarian Milton born and raised?

Latarian Milton was born on 30th August 2000 in Palm Beach Florida, United States. He was born to a 16-year-old mother, Sheneequa Milton and there is no information on his biological father. Since Latarian’s mother was very young to raise him, his grandmother, Vikita Stratford.

Latarian has American nationality and Afro-American ethnicity. He has a birth sign, Virgo. Latarian didn’t grew up in a happy and lovely family as his mother was a chain smoker. Additionally, he was unaware about his own biological father. As a result, we can predict that he came to become a person he is today.

How old is Latarian Milton now?

Latarian is 21 years old and he will be celebrating his 22nd birthday in August 2022. Latarian Milton is all grown up man now. Describing his physical appearance, Latarian is 5 feet 5 inches tall which is about 1.65 meters. He has a voluminous body build and possesses black eyes and hair.

What did Latarian Milton do?

Latarian was only 7 years old when he successfully stole the keys to her grandma’s Dodge Durango and drove across Palm Beach along with his friend. When he was asked what’s the reason for such behavior, Latarian responded that he was angry with his mother, Sheneequa. He also wanted to do some hood rat stuff which later on came to become a famous meme in the United States.

Additionally, Latarian added that he wants to do bad things. Taking his grandmother’s car, Latarian hit two parked cars and hit other moving cars before it got stuck in a field. He wasn’t arrested for his behavior as Latarian was too small to be jailed and not long after that, he attacked his grandmother just because she didn’t buy him the chicken wings he wanted.

You might want to checkout on television personality, Gloria Govan.

Why was Latarian Milton jailed?

Almost 10 years later in 2017, Latarian was arrested for the first time for robbing the car by pulling the driver out of his car. Along with his friend, Latarian requested a lift to a passing car and in an attempt to do so, they pulled the driver away and took over his car.

The character Lamilton Teashawn in an animated cartoon, “The Boondocks” was inspired by Latarian’s behavior.

Where is Latarian Milton now?

Latarian graduated from his high school, Palm Beach Middle School in 2015. Just when everything was going well in his life. Latarian was heading for the right path and he even confessed that he wants to graduate with engineering in technology and join the Navy.

Milton’s grandmother was also happy with how he was growing up to be. Unfortunately, Latarian is currently believed to be in juvenile detention after his behavior in 2017. There has been no update on his current life so far.