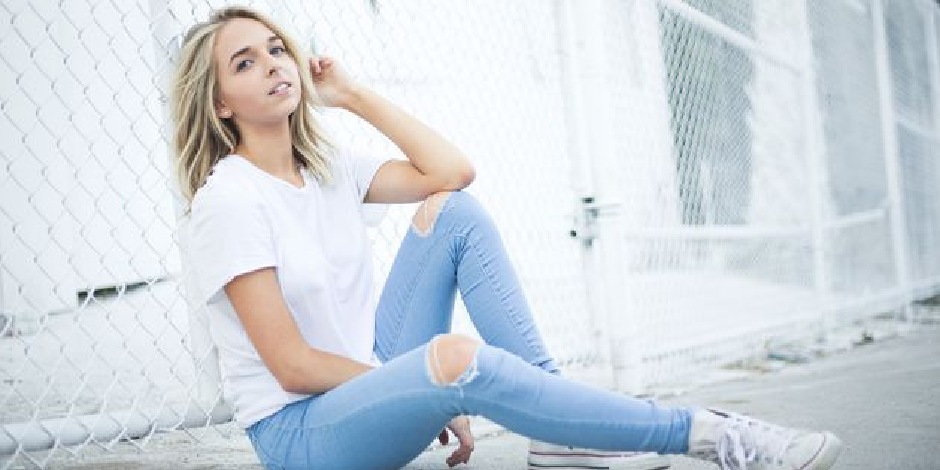 Jenn Mcallister is an American-born actress and YouTuber, famous for posting fun videos on her YouTube channel and also known for playing the leading role in “Foursome” and “All Night”. Since 2008, she is working actively in her career.

Where was Jenn born and raised?

Jenn Mcallister was born on 9 July 1996 in Holland, PA as a daughter in a well family. Currently, she is at the age of 24, and her zodiac sign is Cancer, as she was born on 9 July. She holds an American nationality and belongs to the North American ethnicity.

To talk about Jenn Mcallister’s physical statistics, she has a height of 5 feet 4 inches (1.63 m) and a weight of 55 kg. Besides this, her body measurements are 34-24-35 inches. She has got a beautiful face structure with blonde hair and dazzling blue eyes. Likewise, Jenn’s shoe size is 7 US.

Jenn Mcallister grew up nicely in her hometown. She moved to LA to follow her career, and she started living with her best friend. However, the information about her family and relatives still has a question mark as she likes keeping her personal life far from the media.

She stated that her parents are very supportive so that it became easy for her to take further steps in her career. Likewise, from the age of eight, she became interested in making videos, so she followed her career later.

To talk about her education, she attended the Council Rock School South, located in Holland, Pennsylvania. Jenn kept her further education information secret as she is very secretive about her personal life.

How did Jenn start her Career?

Jenn Mcallister started her career after she started posting fun videos on her YouTube channel. After she grabbed the attention of many people, she made her contract with Awesomeness TV in March 2013. Later, in June 2014, she also made a contract with YouTube management.

Further, she began her acting career after being cast as Abby in the film “Bad Night” in 2015 where she shared the screen with June Diane Raphael. Later, from 2016 to 2018, she starred in the main role of Andie Fixler in the movie “Foursome”. She also offered the role in the film “Sleep Tight” and “Guardians of OZ”. Likewise, she played the main role of Deanna in the movie “All Night”.

Check out the latest updates on June Diane Raphael

In her career, she won the Streamy Awards for Best Actress from the movie “Foursome”

Jenn Mcallister’s relationship status is still a mystery for her fans and followers as she is private about her personal life. Currently, she is focusing on her career more than living in a relationship, so she enjoys her single life with her family and friends.

Jenn Mcallister is active on Instagram with the tag name (“@jennxpenn”) where she has got 1.5 million followers and posted 2332 posts. She has posted so many beautiful photos of herself with his friends on her Instagram account. Jenn also received many likes and comments on her post. Jenn also has a Twitter account with the tag name (“@jennmcallister”) where she has got 1.7M followers and tweets 24K times.

The Youtuber is also active on Facebook with the name “Jenn Mcallister”, where she has 578K followers and seen posting so many beautiful photos of having fun with her friends.

Jenn Mcallister has created a YouTube channel with the name “jennxpenn”, where she has got 3.53M subscribers and seen posting so many prank videos and gaming videos. She grabbed the attention of many people after she began posting exciting videos on her YouTube channel. She joined on YouTube on 16 January 2009 and started posting videos where views on the videos reached 378,366, 114 views.

The media personality also has a Twitch account with the name (“@jennmcallister”) where she has got 46.8K followers. She streamed about playing live games on her Twitch.

What is the Current Net Worth of Mcallister?

A beautiful, active and talented actress and YouTuber, Jenn Mcallister is popularly known for posting so many fun videos on her YouTube channel and famous for playing the main role in “Foursome” and “All Night”. Currently,Jean is spending her amazing life with an estimated net worth of $775K.