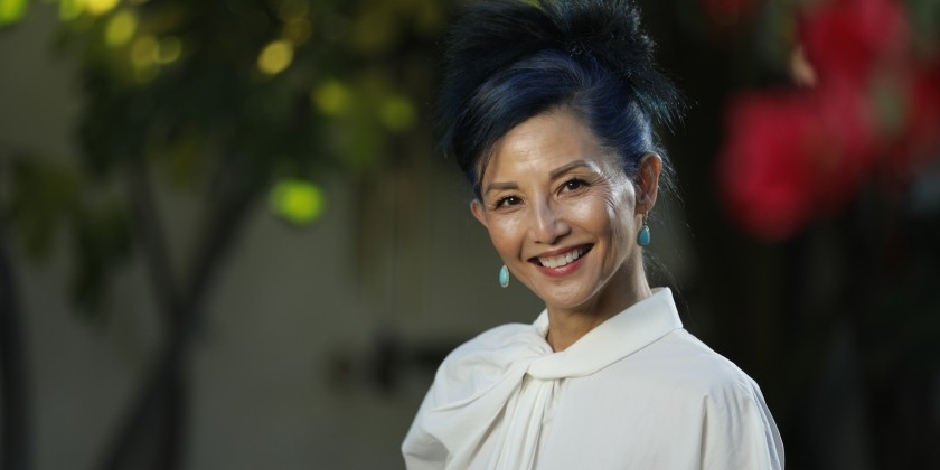 Tamlyn Tomita is a Japanese-American actress and singer who is popularly known for playing the roles in the series “The Karate Kid Part II”, “Cobra Kai” alongside Tanner Buchanan, Martin Kove, and Peyton List, and “The Joy Luck Club”. Since 1996, she has been seen working actively in her acting career.

Where was Tamlyn Born and raised?

Tamlyn Tomita, whose real name is Tamlyn Naoi Tomita was born on 27 January 1966 in Koza, Okinawa, USCAR as a father of Shiro Tomita and a mother, Asako Tomita. Currently, she is at her age of 55 and her zodiac sign is Aquarius.

Tamlyn Tomita holds both American and Japanese nationality and belongs to Japanese and Filipino ethnicity.

Tamlyn Tomita went to attend Granada Hills School for his education. After that, she also joined UCL for her further study and was planning to become a history. When she was doing his study at UCLA, she was seen participating in Nisei Week and crowned as 1984 queen.

How did Tomita start her Career?

Tamlyn Tomita started her acting career after she had been cast as Kumiko in the American martial arts drama movie “The Karate Kid Part II” in 1986 which was written by Robert Mark Kamen. Her performance in “The Karate Kid Part II” has been praised by everyone and received lots of positive responses. In this movie, she starred with Yuji Okumoto and Pat Morita.

After that, she was also seen appearing as Karren Saito in the movie “Hawaiian Dream” in 1987. She was also seen playing roles in several movies like “Touch” alongside Olesya Rulin, “Four Rooms”, “Robot Stories”, “The Eye” and more. In 2009, she made her appearance as Jun Kazama in the American martial arts movie “Tekken”.

Tamlyn started her television career after she had been cast as VC Peasant Woman in an American military drama television series “Tour of Duty” in 1987. Later, in 1989, she also provided her voice in an animated series “The Karate Kid”. Moreover, she is also known for playing the role of Allegra Aoki in the series “The Good Doctor” from 2017 to 2019.

In 1993, she was cast in an American drama movie “The Joy Luck Club” where her performance received many positive responses and she became able to earn more success in her career. Likewise, in 2021, she got the role in the American martial arts comedy-drama streaming television series “Cobra Kai”.

Who is Tamblyn in a relationship with?

Before Tamlyn Tomita has been in a relationship with Greg Watanabe who is an American actor but they later broke up. Her relationship is still a mystery for her fans and followers but there is a rumor that she is married but the name of her husband has not been revealed.

To talk about Tamlyn Tomita’s physical statistics, she has got a height of 5 feet 2 inches (1.57m) and a weight of 52 kg (115 lbs). Besides this, her body measurement is 29-22-31 inches with a slim body. Likewise, she has got a beautiful face with black hair and eyes.

Besides this, she is also active on a Facebook account with the name “Tamlyn Tomita” where she has 8.1K followers.

What is the Current Net Worth of Tamblyn?

A beautiful, attractive, and talented actress and singer Tamlyn Tomita was seen appearing in several movies and series in her career which includes “The Karate Kid Part II”, “Cobra Kai”, “The Day After Tomorrow” and more. She became able to earn success in her career and became able to have an estimated net worth of $3 million.