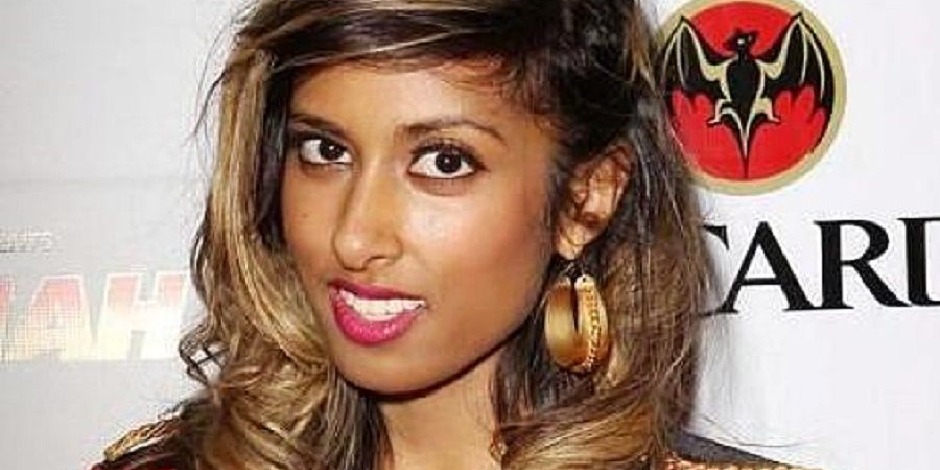 Anjulie Persaud is a pop singer and songwriter from Canada known for her song in The Vampire Diaries, The Hills, and in the film, Fame, Jem, and the Holograms and So Undercover. She has worked with other big singers like Zedd, Diplo, Nicki Minaj, and others. She is also known for being the love interest of American comedian, television host, and commentator, Bill Maher.

Where was Anjulie born and raised?

Anjulie Persaud was born on 21st May 1983 in a town in Ontario called Oakville, Canada. Thus, she has Canadian nationality and belongs to Indo-Guyanese ethnicity. She is the youngest child of her parents and not much information about her parents has been disclosed by her. She has 3 siblings above her and she was born under the birth sign, Taurus.

Anjulie Persaud was educated in St. Ignatius of Loyola Secondary School. Further information regarding her education is still a mystery to us as she hasn’t mentioned her further degrees. She chose her singing career earlier than receiving a degree.

How did Persaud start her Career?

Anjulie Persaud was inspired by music after watching The Velvet Rope Tour performance of famous American singer and songwriter, Janet Jackson. She started carving a path for herself in the music industry. She started writing songs when she was only in her teen. She released her only album, “Anjulie” on 4th August 2009. That year, her album was listed in Billboard 200 Albums chart in 108 positions and the second position on the US Billboard Heatseekers Album chart.

Anjulie was nominated with MTV Video Music Award and mtvU Woodie Award in 2009. In 2011, Persaud released the song “Brand New Bitch” which gained her Juno Award nomination in 2012. Next year, she released another single song, “You and I” which earned her first-ever Juno Award for Dance Recording of the Year in 2013.

Who is Anjulies dating to?

Anjulie Persaud is currently in a relationship with well-known American TV host and comedian, William Maher popularly known as Bill Maher. They were seen together before in 2014 and Maher who is 65 years old as of 2021 almost half of age older than her.

Her boyfriend Maher has never been married as he doesn’t prefer to be confined with only women for the rest of his life and he hasn’t maintained a relationship longer than 2 years with anyone. He has been maintaining a good relationship with Persaud for almost 7 years now which is new for him to remain with someone this long.

Persaud isn’t married to anyone neither she has any children of her own. She has been maintaining a good relationship with her boyfriend currently. A few facts about her are that despite being a well-known singer, she doesn’t smoke either on drugs or alcohol. She is a religious person and she once shared her opinion regarding such things in her Instagram post.

“I don’t smoke, I don’t do drugs and I barely ever drink. Not because I’m morally against it or beacuse it’s my way of not following….” says Anjali.

Anjulie Persaud has been busy in her career. She loves playing guitar and piano as well as making music. She prefers to keep her personal life low-key.

Anjulie turned 38 years old in 2021. She is a beautiful woman possessing black eyes and dark brown hair. She stands 5 feet 6 inches tall and weighs 65 kg. Her sexual orientation is straight. She is known for her afro hairstyle and cool getups.

Check out the latest updates on DJ Brandon Avery Perlman

Anjulie Persaud is active on Instagram where she has over 34.7 thousand followers and she can be connected by @anjuliemusic. Her official page on Facebook has over 66 thousand followers. She is not active on Twitter. She also has her own YouTube channel where her video has gained over million views.

What is the Current Net worth of Anjulie?

Anjulie has an estimated net worth of over 4 million dollars as of 2021. There is no doubt that she is making a good fortune out of her singing, songwriting as well as composing career. As for her boyfriend, Bill Maher has a net worth of over 140 million dollars. The couple is living a luxurious life and as a millionaire, we can not expect any less from them.