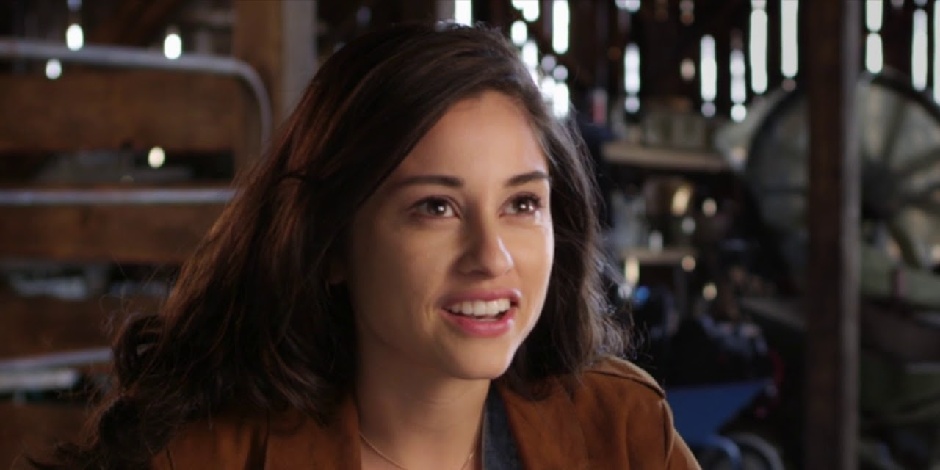 Yvette Monreal is an actress from the United States, who is best known for her supporting role as Gabriela in the action film Rambo: Last Blood. She has further gained fame with her appearance in the television series, Matador as Senna Galan and Faking It as Reagan and in Stargirl as Yolanda Montez.

Where was Yvette born and raised?

Yvette Monreal was born on 9th July 1992 in a famous city called Los Angeles where stars are born. Her birth name is Yvette Monreal and is popularly known as Yvette. There hasn’t been much information about her parents has been disclosed yet, but we know that she has a very supportive parent. Her father bought her first car from her aunt which was a 2000 Toyota Camry.

Monreal has the nationality American and she has Hispanic ethnicity with Chilean ancestry. Her sexual orientation is straight and she has Cancer as her star sign.

She has a degree in fine arts from Stella Adler of Acting Conservatory.

How did Monreal start her Career?

Before starting her career in acting, Yvette Monreal worked in Del Amo mall which was located in Los Angeles. It was her first paid job. She made her acting debut in 2013 from the television series, Chutes & Ladders where she portrayed the character of Olivia in 9 episodes. She then made her smaller appearances in series like Harpies and Awkward before making herself name from the series, Matador alongside actress, Natalie Martinez.

Yvette Monreal then took the role of Reagan in Faking It alongside stars like Taylor John Smith and Sophia Taylor Ali. She also portrayed the role of Adriana in the series, The Fosters where she worked with stars like Sherri Saum and Tanner Buchanan. She made her small appearance in NCIS and Legends of Tomorrow before finally landing her first main role as Yolanda Montez or Wildcat in the superhero tv series, Stargirl where she worked with Darby Stanfield and Luke Wilson in 2020.

Yvette Monreal took a step into the film industry with the short film, Casey where she starred as Casey herself in 2014. She has further made her appearance in the film Lowriders, Once Upon a Superhero and Monsoon. In 2019, she landed the supporting role as Gabriela in the American action film, Rambo: Last Blood alongside star Sylvester Stallone, Paz Vega, Adriana Barraza, and others.

In 2019, Yvette Monreal received her first National Film & TV Awards for Best Supporting Actress from Rambo: Last Blood. She was also nominated with Imagen Award for Best Actress – Feature Film in 2018 from the film, Monsoon.

Yvette Monreal is probably single right now as she hasn’t opened about her relationships yet. However, she was once rumored to be dating a British actor named Gregg Sulkin in 2015. They were both working in the television series, Faking It at that time but none of them confirmed dating each other. She isn’t married and does not have children of her own yet.

Monreal is living a luxurious life right now. We can see her going on vacation in a free time of which her favorite destination is the Caribbean for vacation. She also loves singing and plays the ukulele. She is a die-hard fan of Adam Levine. She also once shared about being star-struck after meeting American actress, Eva Longoria in her first meeting.

Monreal is currently giving her 100 percent in her career. She is a very hardworking woman and prefers to wake up early morning to get her work done in time.

Yvette Monreal is an active social media user. She makes sure to posts about her everyday life and works in her on Instagram where she has over 204 thousand followers watching over her. She can be connected by @yvettemonreal on Instagram. She is also active on Twitter where she has accumulated over 47.5 thousand fans. She can be connected by @YvetteMonreal. Monreal also has her own official Facebook page with over 16 thousand followers.

What is the Current Net Worth of Monreal?

Yvette Monreal has an estimated net worth of 1 million dollars as of 2021. All thanks to her success in her acting career that she has able to accumulate such an amount. Since she is only beginning in the starting phase of her career, we can expect more from her in the coming days.